The Road To: Anna Kay wants to benefit from Belgian experience at British Championships

Anna Kay (Starcasino) admits it was a major disappointment. Early in the season, in September, the British cyclocross talent broke her collarbone. During training she had an unfortunate collision with a car. Now she is back at competition level. On Sunday she will compete for the British cross title.

“That fracture – my first ever – was very annoying. I had been building up to the season for five or six months. And then you fall and suddenly have to start over again. Instead of being negative about my situation, I showed my resilience. Together with my coach Paul from Trainsharp I made a good plan to start riding again as soon as possible and to build up my stamina to a higher level than when I started the season. I also worked closely with my physio in the UK. We started with small exercises and took one step more every week. I was also lucky to have a great surgeon in Belgium, who kept in touch with me in the weeks after the operation. We talked weekly on FaceTime, which really helped me to regain confidence in my shoulder.”

In November Kay showed on Belgian soil that she was back. She finished eighth in the Jaarmarktcross in Niel (Superprestige), won by world champion Lucinda Brand. Two days later she snatched victory in Leuven (Ethias Cross). “I felt stronger than when I started the season in September, before the accident”, she said. She also made her presence felt in December, including a podium finish in Essen (Ethias Cross) and a top-ten finish in the Azencross (X2O Trophy).

The British rider, who rides for the Belgian Starcasino team, wants to impress in the coming weeks, starting next weekend at the national championship in Crawley (West Sussex). After that she will ride a few more races on Belgian soil before heading to the cyclocross world championships in Fayetteville (USA). “I haven’t been to America for a while and I don’t know the course there well enough yet. I would like to be in good shape for that race, but the world championship is not my main goal.” 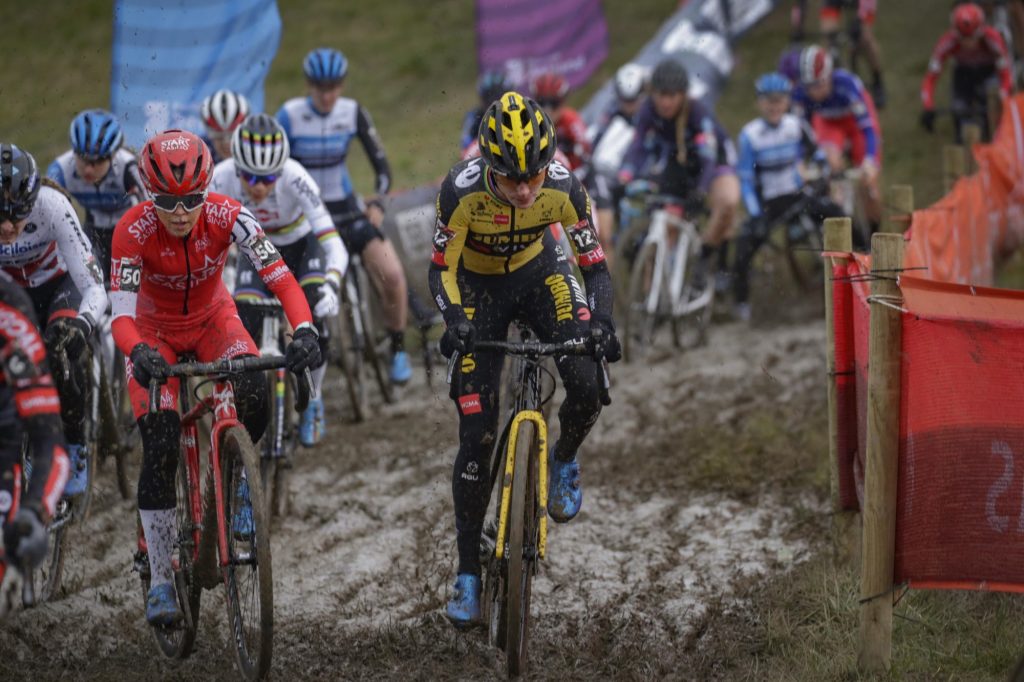 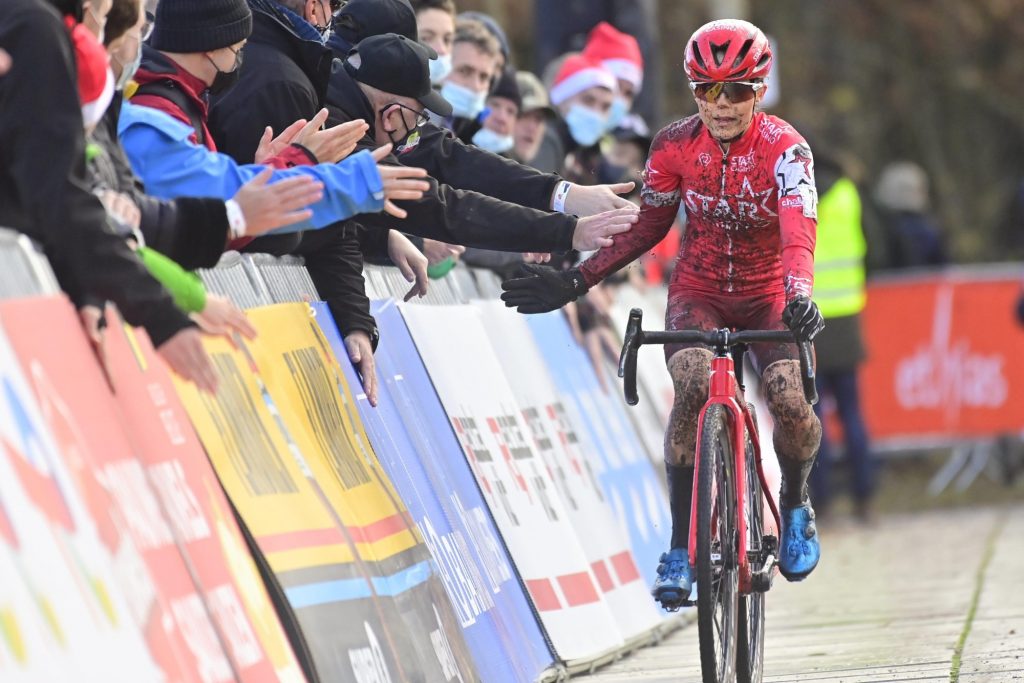 Kay feels she is making progress every year. Belgium is an excellent breeding ground for her to grow further. At Starcasino she has been working with sports director Dieter Vanthourenhout and others since this season. The Fleming competed at the highest level for thirteen years. “The cooperation is very nice, Dieter gives tips when we are riding the course. He is also indispensable in the preparation for a race. He has a lot of knowledge about the equipment, such as tyres and tyre pressure. He makes sure we are properly adapted to the conditions”, says Kay.

“We have team training with him most Wednesdays. He knows all the good training spots and also makes sure that we can go somewhere for a delicious meal afterwards. Dieter has helped me plan my season. It’s really nice to have someone you can rely on. I can go to him with all my questions, whether they concern the right line, tyres or clothing. He has so much experience and is happy to share it with the team.”

Belgium is Kay’s home during the season. Team manager Christel Herremans gives her a place to stay, near Ghent. During Christmas and the turn of the year Kay stayed in Buggenhout, together with her boyfriend Ben Turner (INEOS Grenadiers) who is also active offroad. “It’s better to be based here because there are so many races. There is more time to rest and train, instead of travelling back and forth so much. I used to do that and by the end of the season I was exhausted. Because I live here, I can also train with the team and occasionally there is time to recon the courses.” 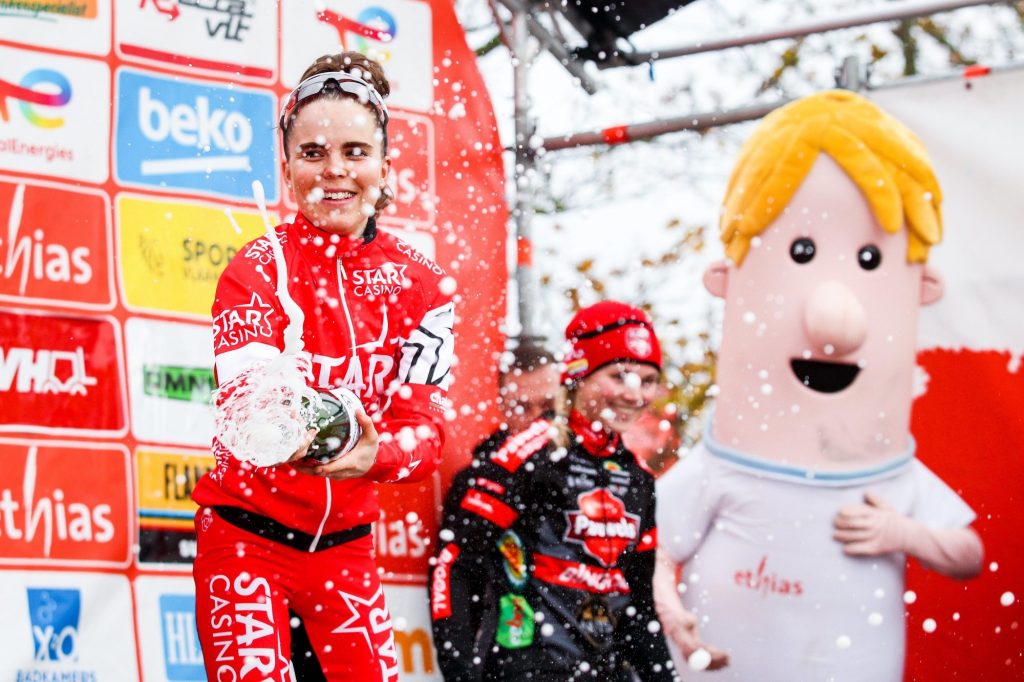 However that may be, Kay remains a proud British rider who likes to come home to her own country. She enjoys following the rapid development of British cyclocross. “Cyclocross in Britain is in a really good place, I think. The British coach, Matt Ellis, has done a good job training riders in recent years and has helped me a lot. He still helps me, by the way! A massive crop of really good youngsters and juniors is coming through. Zoe Backstedt, Nathan Smith and many more juniors are showing themselves at World Cup level. And with Tom Pidcock performing so well (winning the World Cups in Rucphen and Hulst, ed.) I expect this to inspire even more youngsters in the UK to start racing.”

Kay’s source of inspiration to take up cyclocross was her father, who is still active (in the masters). “When I was young I used to ride a mountain bike casually with my dad at the weekend. I liked that so much that I started racing.” To keep in shape in winter, she decided to take up cyclocross. That environment soon felt like family. “After I finished my A-levels at school I started taking my training a lot more seriously. In my first season as an Under 23 rider, I got some good results at national level and was able to compete with Great Britain in a couple of World Cups, the European Championships and then the World Championships. From then on it has got better and better year after year!”

Kay is still far from where she wants to be. “I still have a lot of work to do to build up my engine and strength. I am a small rider and sometimes struggle on the flatter power courses. In order to get the biggest improvement the best thing I can do is work on my overall strength. I think a good road season and consistent summer can really help with this.” 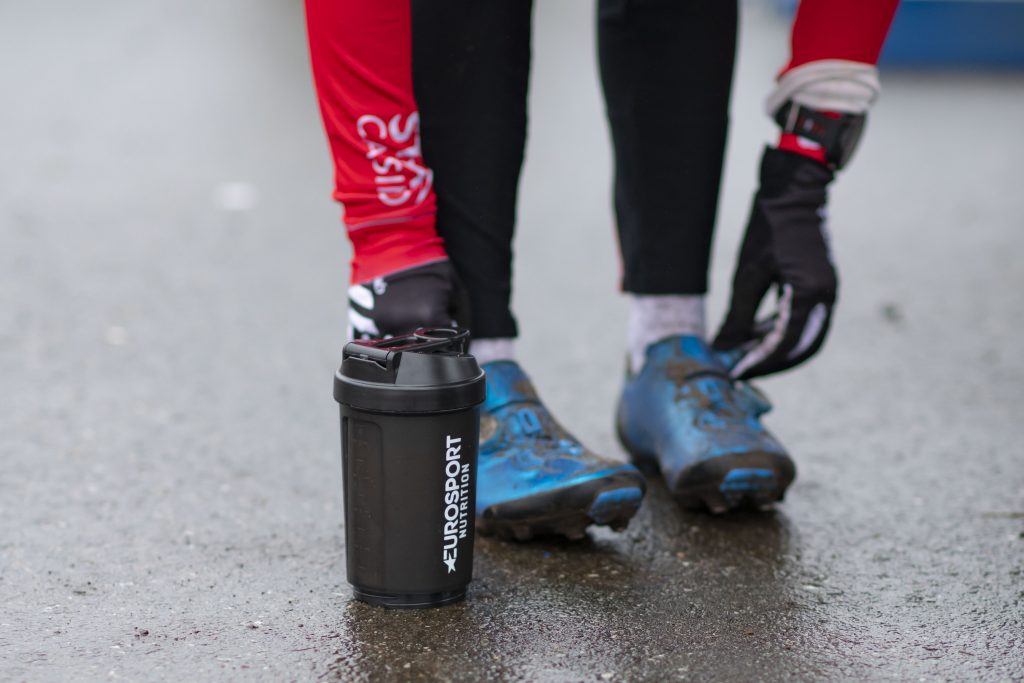 Anna Kay has been riding with Eurosport nutrition since this winter. “My stomach is quite sensitive, so I’m always a bit hesitant to change nutrition brands. But I was positively surprised by the effect that the products of Eurosport nutrition had on me! I really like the Energy Bars and Isotonic Sports Drink, I take them before races, they agree with my stomach. I like the fact that there are many different flavours in the bars and gels. That means you can vary and not get bored of the same taste.”